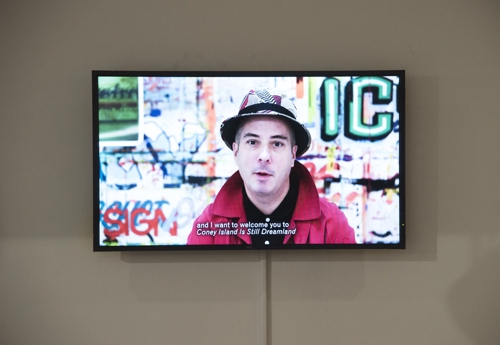 Stephen Powers was born May 25th, 1968. He grew up in Philadelphia’s Overbrook neighborhood, and attended The Art Institute of Philadelphia and the University of the Arts. He began as a graffiti artist, known mostly for his provocative conceptual pieces. In 1994 He moved to New York where, in one of his most ambitious works he painted on storefront grates throughout Brooklyn, working openly in broad daylight.

In 1999 Powers stopped writing graffiti and tending bar to dedicate himself to being a full-time artist.   His work has been shown at Venice and Liverpool Biennials, as well as numerous shows (TO BE FAIR: 2.75 shows) at Deitch Projects. Powers was a Fulbright scholar in 2007. He used the grant to paint in the streets of Dublin and Belfast. His work in Belfast’s Lower Shankill area was inspired by the area’s political murals; Powers told the New York Times that he was “taking the form of the murals, which are powerful for all the wrong reasons, and trying to retain some of the power and use it in a really good way.”

Building on what he started in Ireland, Powers is now working on an ongoing mural project about the complexities and rewards of relationships titled A Love Letter for You. In Philadelphia, Stephen (call him ESPO) and his crew (call them ICY) painted more than 50 walls along the elevated train along Market Street in West Philly. The project, sponsored by a grant from the Pew Center for Arts and Heritage through the Philadelphia Exhibitions Initiative, and produced with the Philadelphia Mural Arts Program, has generated positive reviews from the New York Times, and the Wall Street Journal.

The accompanying book A Love Letter for You, shot by photographers Adam Wallacavage and Zoe Strauss, was published by Free News Projects and is now available. It is distributed by DAP in New York City.

In 2005 he curated "The Dreamland Artists Club", a project in which professional artists helped Coney Island merchants by repainting their signs. And in his show Coney Island is Still Dreamland (To a Seagull) he recreates that work at the Brooklyn Museum, on display until March 13, 2016. “Powers transforms our Iris and B. Gerald Cantor Gallery into an immersive environment filled with paintings and signs created in the visual vernacular of the iconic seaside community.”